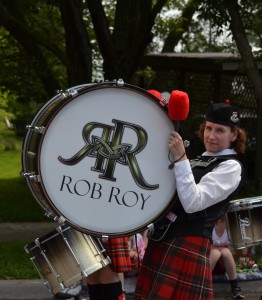 It moves down Main Street to Church Street and ends at the Bath Public School  about 2 pm.

Traffic is diverted around the Village starting at 12 noon to clear streets for the parade. Best advice is to be in the Village before 12 noon

For easiest access to parking throughout the day, take Highway 2, turn south at County Road 7 (Church Street) and watch for the Event Parking sign as you come past Loyalist Blvd.

The free Shuttle Bus will take you down to the corner of Church and Main in the heart of the Village.

WHY WOULD YOU WANT TO BE IN THE PARADE?

Bath incorporated in 1859. As an incorporated village citizens could elect a council to make decisions about local projects/concerns and to raise taxes.

A number of floats are being developed depicting village life over these years. Some folks have expressed an interest in dressing up in period clothing. Whether or not you adopt a historical theme, we’ll be glad to see you.

Over the past few years the Committee has received feedback indicating a growing concern around the use of water guns and throwing of water balloons.

Some past and long-time parade participants have refused to come back to the Parade citing water damage to radios and the interiors of restored automobiles. Antique machinery can seize if it gets wet and many parade participants don’t want to get wet.

Parade watchers have complained that the spraying of water and throwing of water balloons is indiscriminate and often people are unable to move quickly enough to avoid getting wet.

More concerning is the throwing of water balloons which can really sting and in at least one case, has hit a youngster in the eye. Fortunately no damage was done, but the potential exists.

It is the Committee’s preference that parade participants not spray water or throw balloons. We recognize that we can’t control what may come your way so we have developed NO Water signage for those in the parade and parade watchers.

N.B. The OPP will be diverting traffic around the Village starting at 12 noon to clear streets for the parade

If you are coming to Bath from the east on Highway 33, take Academy Street to Church Street; turn left on to Church, then right at the stop light. Continue along Main Street about 1.5 kilometres to Finkle’s Shores Park.

Those coming from the north will follow County Road 7 to the stoplight in Bath, and then turn right onto Main Street.  Continue along Main Street about 1.5 kilometres to Finkle’s Shores Park.

Those coming from the west on Highway 33 will see Finkle’s Shores Park on the lake side of the road just before coming into the Village.

Remember – traffic will be diverted around the Village starting at 12 noon.

When you arrive at Finkle’s Shores Park, please check in at the Parade Registration Desk. We need to know you are present and you need to collect your line-up number.

Your entry will be escorted and lined up along the Bath Road by one of the Parade Marshals.

The parade route is 1.9 kilometers and should take about 45 minutes.

PLEASE keep up to the entry in front of you. This is important to prevent large spaces between Parade Entries especially as the Parade turns the corner at the stoplight.

FRYWAY 33 is located at the west end at Finkle’s Shore Park. It sells cold drinks and light lunches.

There will be three portable toilets on site including a handicapped one with hand sanitizer.

Water will be available at the marshaling areas and along the parade route. We recommend lots of sunscreen and head coverings.

If you are seated in a vehicle or on a float a small battery powered fan at your feet may help keep you cool. 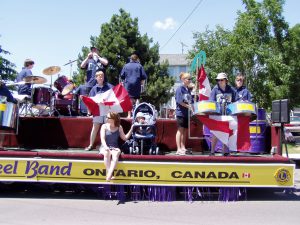 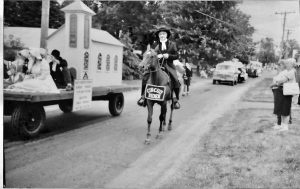 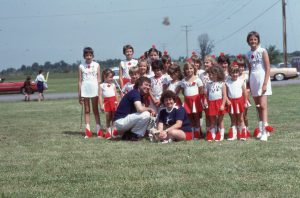 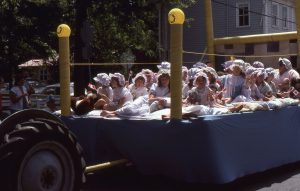 If you and you family are thinking of taking part in this year’s parade, here are some suggestions

1. Your entry doesn’t have to be elaborate. Gather up the kids on their bikes, put the little one in a stroller, dress in old fashioned clothes, or wear your red and white and walk the route from the corner of Country Club Drive to Bath School. Let us know you’re coming – bathcanadaday@live.ca  and come to the corner of Main Street and Country Club Drive for 12:30 pm. 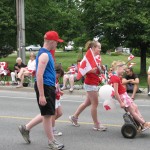 2. Make a banner with your family’s name and how long you’ve lived in Bath.

Did you know that in the late 70’s and early 80’s the slogan for Bath’s Canada Day celebration was Having a Ball in Bath? Quite by coincidence, the Loyalist Residents Association came up with the same theme for their parade entries and used it for a couple of years. 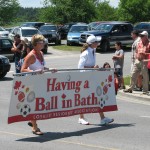 3. Make a sign for each side of the car, get some flags from the Welcome Booth in Centennial Park and join in.

4. Combine your entry with another family  – related or not.

5. If you want to do something more elaborate, that’s fine too.

A float might highlight the family business, a hobby or talent your family shares, or portray individuals from different generations. This could be a tie-in to life in Bath over the past 160 years.   Let your imagination take flight and have fun!