The Bath Canada Day Committee is an enthusiastic group of volunteers who come together to provide family friendly programs and activities for Bath and area residents on July 1st.

Your 2022 Planning Committee is:

We have a great team and we have a lot of fun.

Extra hands are always welcome. If you would like to help out either on Canada Day or before, email canadadayinbath@outlook.com or call Diane at 613-352-5670.

Below are some photos of past and present volunteers. 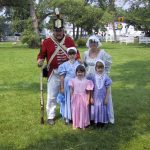 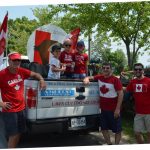 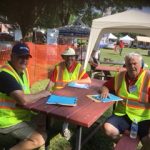 Bruce, John and Joe setting up the at the vendors Market 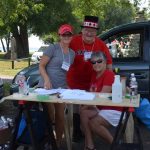 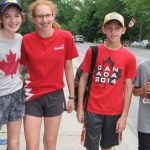 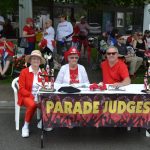 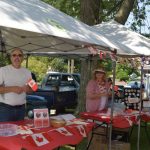 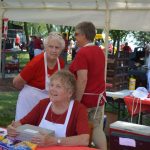 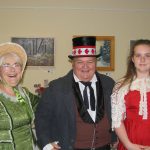 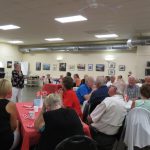 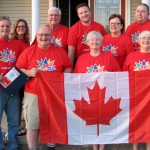 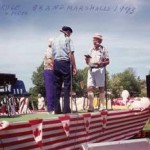 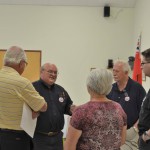 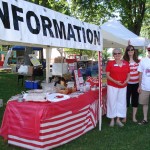 A Brief History of the Bath Canada Day Celebrations

At the time of Confederation on July 1st, 1867 Canada was officially declared the Dominion of Canada.  In 1879 a Federal law made July 1st a statutory holiday which was called Dominion Day.  Canadians celebrated the Centennial of Confederation on July 1st, 1967, and the Village of Bath was among the many communities across the Country who honoured Dominion Day with special events and activities. The parade, park activities and fireworks have been a continuing event in the village since 1959.

On July 9th, 1982, Prime Minister Pierre Trudeau announced that the National Holidays Act had been amended on that day to change the name of Dominion Day to Canada Day.  Materials were sent to municipalities across Canada encouraging them to organize events during the last week of June, culminating in Canada Day celebrations on July 1st.  The clerk administrator of the village, June Carruthers, took this information to the cash strapped Bath Council of the day who endorsed the idea but could not fund it.  She then contacted people in the village who she knew would be keen to work on the project and the rest is history.

The Bath Canada Day celebrations are spectacular and continue to attract large numbers of people annually to participate in the activities. They have continued for over 62 years because of the many dedicated and enthusiastic volunteers who have organized and supported this event.  The Bath Parade attracts thousands of people every year, as does the spectacular Fireworks display put on by the Bath Volunteer Firefighters and sponsored by Canada Cement LaFarge.  Music has always been a big part of Canada Day in Bath from the marching bands in the parade to the concerts and dancing in the park. Music is also enjoyed before the evening fireworks. Activities in the park include the Official ceremonies, a Vendor’s market, food tents, displays and demonstrations, entertainment by music bands, folk dancers and clowns, children’s activities and games including Fireman’s Foam sliding provided by the Bath Volunteer Firefighters.  The Barefoot Players from Queen’s University have performed in the park as have other entertainers. The format of a citizen driven, community funded event lives on. 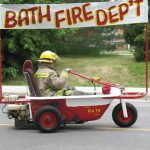 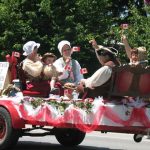 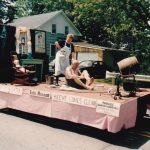 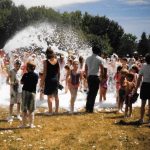 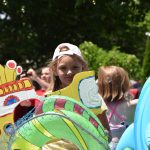 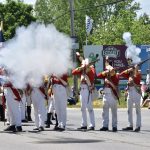 The Bath Canada Day Parade has excelled at attracting crowds and is billed as the largest parade between Toronto and Montreal.  There are often more than 7,000 people viewing the parade annually.  During the re-enactment activities of 2012, viewers were counted at well more than 10,000 people.

Several long-time residents of Bath proudly claim that it has never rained on the Bath Parade.  Early parades started at 11:00 am from the field at the top of the hill on Main Street north of Bulch Ave and travelled down Highway 33 now known as Main Street in the village.  The Bath Public School was built on Church Street in 1972.  In 1974 the Canada Day parade was organized to begin at the school, march down Church Street to Queen Street and then travel through the village and return to the school on Church Street.  The parade became too long for this route to continue because the front of the parade returning to the school met the parade participants marching down Church Street.  The committee then decided to begin the parade at Finkle Park on the west end of Bath, traverse Main Street, turn left onto Church Street, finishing at the Bath Public School.  This route has continued to this day.

The Bath volunteer firefighters have been a very important part of the Bath parade.  At least one firetruck has been in every parade from the very first parade in 1959.  In the 1980s some firemen in the firetrucks began spraying water at some young people watching the parade.  The young people eagerly took up the challenge and started shooting water back at the firemen using water guns and water balloons.  This fun continued until 2019 when it became a bit too much for both the spectators and other participants in the parade. The organizers of the parade that year had to call for “NO WATER” during the parade.

The Bath firefighters have continued the tradition of having a bathtub on wheels in the parade annually, and in the mid 1970’s the bathtub was motorized.  There are commonly more than 3 – 4 Marching Bands in the parade and several floats with music.  The Rob Roy Pipe Band and Highland Dancers have been annual participants in the Bath Canada Day parade.  Local children are encouraged to decorate their bicycles for Canada Day and the winners of the Best Decorated Bicycle contest are included in the parade.  Many antique tractors, cars and trucks owned by citizens in the area have participated annually in the parade, including the 1928 Rumley Oil Pull tractor owned by Archie Tompkins.

The first Bath Tub Derby was held at 2:00 pm on September 26, 1959 as part of the celebration of the Centennial of the village of Bath.  The race started at the top of the hill near  now on Highway 33 and ran down the hill into the village.  It consisted of wheel equipped bath tubs driven by Mayors and Reeves.  The Reeve of the village at the time was Ronald Green and he competed with Harold Lasher of Napanee, William Mills of Kingston, Harry Sweetnam of Deseronto, Ernie Barnhardt of Toronto and Harry Veiner of Medicine Hat, Alberta.  There has been a bath tub featured in the Bath parade every year courtesy of the Bath Volunteer Fire Fighters.

The first Canada Day button in the Museum is dated 1984 and commemorates the United Empire Loyalists of 1784.  Jesse Demaine and Rosemary Mallon designed the buttons from 1987 to 1989 and Anne Douglas designed them from 1990 to 1992.

The children’s Canada Day Button contest was started in 1993 and is unique to the village of Bath.  In 1992 Anne Douglas suggested to the Bath Canada Day Committee that they give the children of the village the opportunity to participate in a contest to design the popular Canada Day buttons. The suggestion was enthusiastically received by the staff and students at the Bath Public School and St. Linus Catholic School.  There were 97 entries for the contest in 1993.  When the Village of Bath amalgamated with Ernestown and Amherst Island into Loyalist Township in 1998 the contest was extended to include all the other schools in the district.

There is a complete collection of the winning buttons displayed in the Bath Museum.

The Volunteers of the Bath Fire Department have been major contributors to the activities of Canada Week and Canada Day in the village of Bath since the very beginning.  The Volunteer Firefighters install the flags on Main St. & Church St, offer a Pancake breakfast to guests and residents, provide the Firemen’s Foam in Centennial park for the children and present the firework display at dusk.

The Fireworks have been coordinated and set off by the Bath firefighters since the first celebrations in the village, although the location of the fireworks changed over the years.  Initially they were set off in the field at the top of the hill on the east side of the village near Manor Road.  It was decided that it would be safer and more visible to have the fireworks fired from a barge in the Bay at Centennial Park.  The firework display barge was also in the bay off Finkle Park for a couple of years.  After the new firehall was built on Church Street, the fireworks display moved to the field behind the fire department.  In the mid 1980’s some of the firefighters decided to offer the children an opportunity to slide and play in the Firemen’s foam at Centennial Park.  It was a huge hit with the children of all ages and the activity has continued for many years. 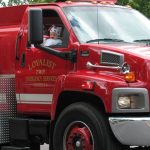 2007; Riding in the Fire Truck on Canada day 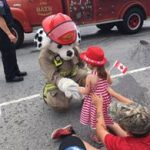 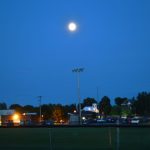 Fireworks ready to go from behind the Fire Hall 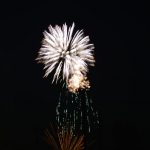 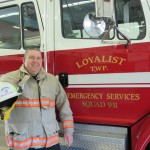 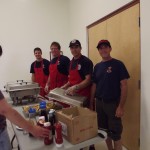 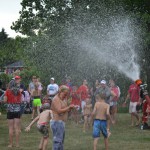 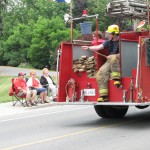